Spider Solitaire is a hugely popular two-deck game. It has a low success rate, requiring a good deal of luck, but also a lot of skill. It can take over half an hour to play spider solitaire, so don't start a game when you just have a brief moment! There are variations to make the game easier, which can make the game more enjoyable for some.

The aim of Spider Solitaire is to build ascending suit sequences in the foundation zone.

Cards can be moved in the manoeuvre zone, onto cards of 1 higher rank, regardless of suit

Multiple cards can be moved as a run, but only if they form a descending sequence of the same suit

Any Card (or run), can be moved into a vacant manoeuvre stack.

Clicking the talon will deal one new card to each manoeuvre stack. Dealing these cards introduces new cards into play, but also covers other cards. A good general strategy for spider solitaire is to move as many cards as possible before dealing from the talon.

Spider solitaire ends when all cards are moved into the 8 foundation stacks.

The 1-suit and 2-suit variations of spider solitaire are easier than the 4-suit version. Because there are less suits, it is easier to form same-suit runs. These raise the success rate significantly. In particular, 1-suit spider solitaire is quite easy, and can be a good place for beginners to start.

The key to winning spider solitaire is being very careful with your moves.

Empty columns are very useful, allowing more manoeuvres. Try using them as "free cells", using them temporarily, but leaving them empty. The more enpty columns you have, the higher your chances of being able to finish the game.

Suppose that the initial spider solitaire deal looks like this: 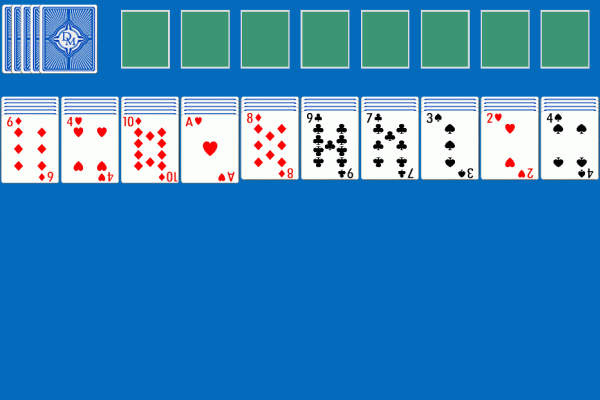 
Here are some initial moves: 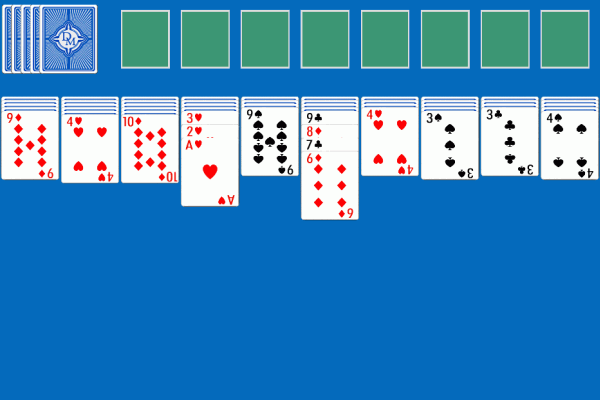 Now we can illustrate the difference between same-suit sequences and mixed-suit sequences. This is very important to understand- as it's one of the keys to playing spider solitaire...

Because that sequence is all one suit, it can be moved as one unit, onto any of the fours. We would probably move it to one of the 4 of Hearts (say the second column), to keep the same suit sequence going.

In spider solitaire, that sequence can not be moved in one go to the 10 of Diamonds, because it is a mixed suit sequence.