La Belle Lucie is a difficult game with an unusually attractive opening tableau. There is an equal mix of luck and strategy.

To move all cards to the foundation zone, building ascending suit sequences.

The opening tableau ensures that all cards are visible at the start of play. The 52 cards are arranged in 18 stacks. Seventeen are initially shaped like a fan, each containing 3 cards. The final stack contains only the single remainder card, but in play it behaves just like the other stacks.

Only the top card of any stack is currently in play. Whenever an Ace becomes available, move it up to the foundation.

Cards can be moved onto the next higher rank, of the same suit. If you make a stack empty, then you cannot place any other cards there.

When you get stuck, you may re-deal by clicking the redeal button (top left, beside the foundation stacks). You are allowed up to two redeals per game. By rearranging the cards, redeals can allow more progress, by removing blockages. But because they are random (the cards are shuffled before a redeal), your ability to progress after a re-deal is largely dependent on luck.

Making a stack empty causes that stack to go out of play, so make sure that you will no longer require a stack before emptying it.

La Belle Lucie is all about clearing blockages. It pays to clear blockages on the higher cards first. This will be shown in the example, below. 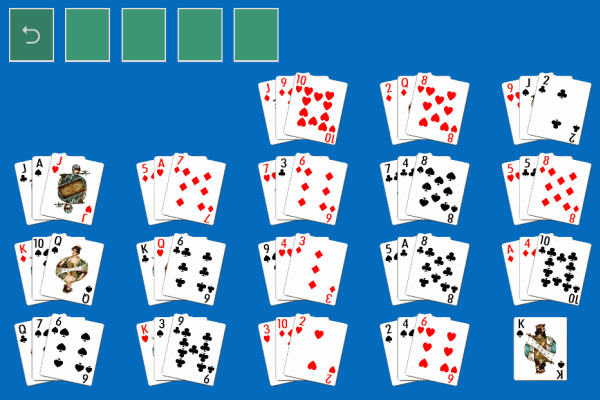 Immediately, the Queen of Spades can be moved onto the King of Spades. 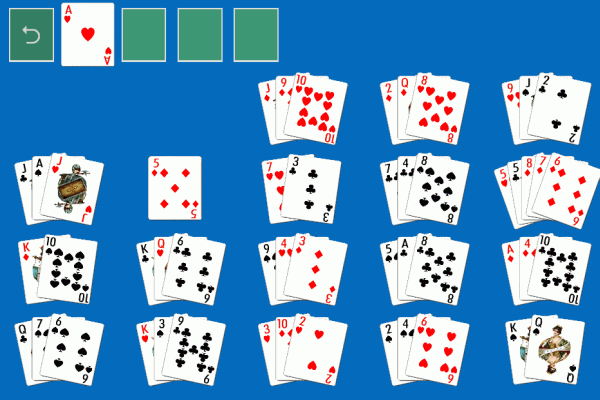 Note that the Ace of Spades was automatically moved to the foundation. In fact, it may have been possible to move the 8D onto the 9D first, if we had moved the 10 of Hearts onto the Jack of Hearts first. In this way, it pays to back-track up the higher ranks to consider all the possibilities before making a move.