One of the less well-known games in the collection, Corona is nevertheless considered a classic. It can be brutal at times, with a low success rate. It requires the ability to plan out moves well in advance, and requires equal measures of luck and skill.

To build ascending suit sequences in the foundation zone.

Corona is a 2 deck game.

Clicking the talon will move a single card to the waste pile. You can only cycle through the talon once.

Cards can be moved in the manoeuvre zone if they are the same suit and 1 less in rank.

Only a single card can be moved at any time. Stacks can not be moved as a whole. This is the source of the strong requirement for good planning.

Be careful of inversions. This is where a card is obscured by the same suit but higher rank. These cards can be difficult to expose. Not paying attention to inversion cases can cause games to become unsolvable.

If at all possible, when a low-ranked card is dealt from the talon, get it into play, either on the manoeuvre zone or into the foundation. Leaving such cards in the waste can cause blockages later, where it is hard to get back to that card.

Defer moves where possible. If a move is possible, but does not allow any further moves, consider deferring that move. Deferring a move until favourable cards are available can help you to make longer stacks. 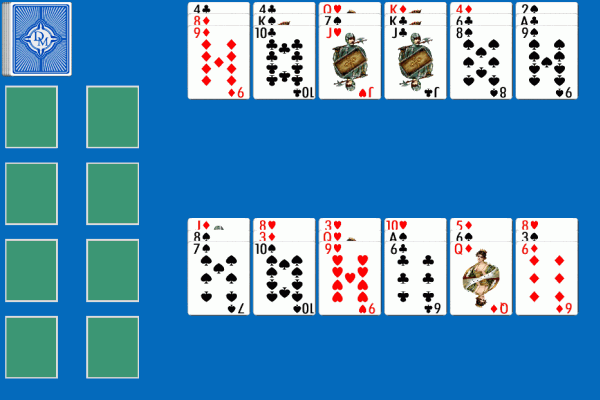 There is an inversion condition in the first manoeuvre stack, with the 9 of Diamonds obscuring the 8 of Diamonds. There are two possible ways to deal with an inversion:

If the card causing the inversion is a King, only the second option is possible, because a King cannot be stacked onto any other card.

There are four other inversion cases in this tableau (which is an unusually high number):

These need to be kept in mind, and resolved when possible.

Some other moves can be made at this point:

No other moves are possible, and the tableau now looks like this: 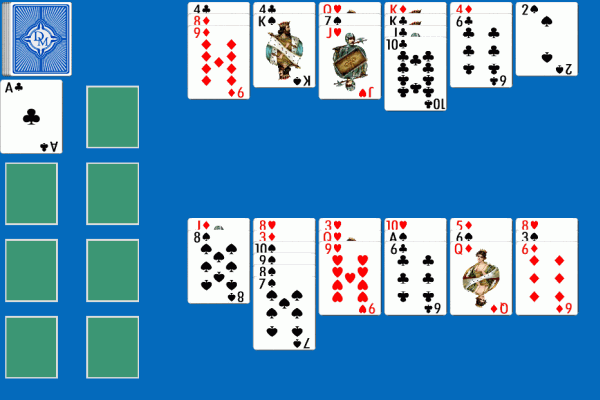 Because no moves are possible, it is time to deal a card from the talon, so we can continue the game.

In the Strategy section above, mention is made to deferring moves where possible. Here is an example:

That means, we didn't really need to move the 9 and 8 of Spades yet. So why would you wait? Well, imagine the next two cards from the talon were the Queen of Spades, then Jack of Spades. With the game as it is now, the best we can achieve is two separate sequences (K-Q-J and 10-9-8-7). If we had deferred the move, we could then make a single sequence (K-Q-J-10-9-8-7). This would free up an extra manoeuvre stack.

The danger of deferring moves is it's harder - you may forget to perform the deferred move when it's time to do it. You may also miss other moves, because deferring moves makes the tableau more difficult to manage.