Largely mechanical, yet a long-time favourite. Has a very low success rate, with a very strong element of luck.

Build descending, circular alternate color sequences in the manoeuvre stacks. When a manoeuvre stack is emptied, a card is automatically taken from the reserve to fill the space. When no moves are possible, click the talon, which flips out three cards. You can cycle through the talon as often as required.

When moving cards between stacks in the manoeuvre zone, you must move either:

Otherwise, you may not move part of the stack.

The game is won when all cards are moved to the foundation stacks.

It is important to get all 13 cards out of the reserve. This can only be done by making a column empty, either by moving cards to the foundation, or by placing one entire stack on another.

Also, while you can keep continue to cycle through the talon as many times as you wish, you often can't expose the exact card you're after (since three cards are flipped out at a time). There is scope for deciding when to play cards from the talon, to maximise the probability of seeing the cards you want, in the talon. 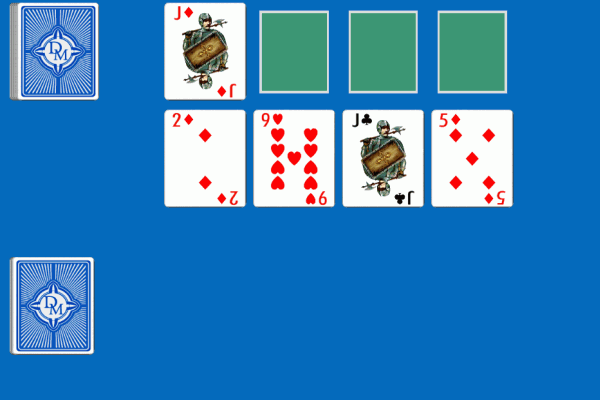 In this situation, the Jack of Clubs can immediately be moved up to the foundation. The empty column is immediately filled with a card from the reserve (bottom-left).

When no moves can be made, flip out three cards from the talon. The tableau now looks like this: 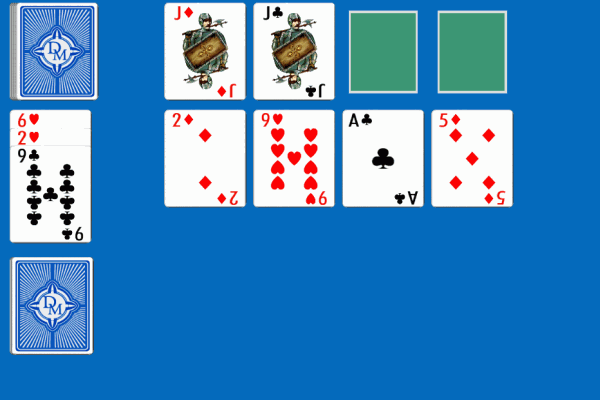 Because maneouvre stacks are decreasing, alternating suits, the Ace of Clubs can be placed on the 2 of Diamonds. No further moves can be made. Now we start to cycle through the talon. When possible, we place Jacks to the foundation, and other cards to the manoeuvre zone or the foundation where possible.

At some point we come to a King of Hearts. It can be placed onto the Ace of Clubs, since the manoeuvre stacks are circular: 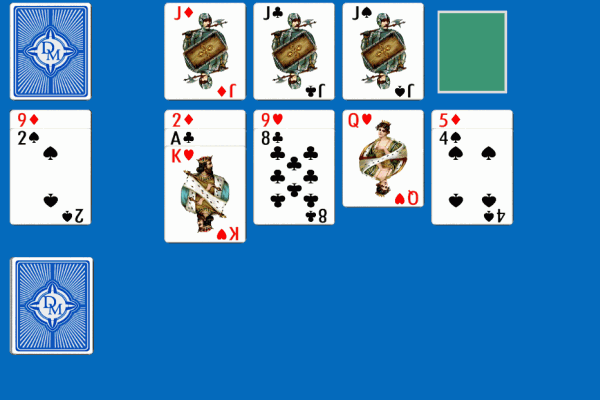