Beleaguered Castle requires a lot of planning before even making the first move. It has a moderate success rate, and involves a lot of skill, requiring good concentration to win reliably.

To complete four ascending suit sequences in the foundation zone.

The opening tableau has four foundation stacks running down the middle, each containing an ace. Four manoeuvre stacks are on each side.

Once cards are moved to the foundation zone, they may not be returned into play.

Only one card may be moved at a time.

Try to make empty manoeuvre stacks, for more flexibility. If possible, form suit sequences in the manoeuvre zone, so it is easier to transfer cards to the foundation zone. 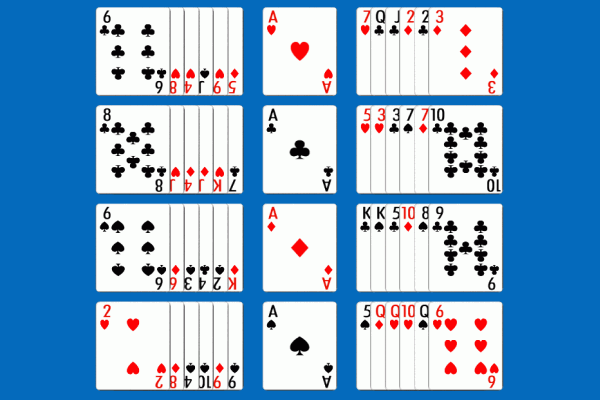 It's a good idea to create an empty manoeuvre stack, if possible. Because a King is the highest rank and cannot be moved onto any other card, no stack containing a King can be emptied initially. Therefore, we look through the remaining stacks for a candidate. The second-top stack on the right-hand side looks potentially good (10C, 7D, 7S, 3C, 3H, 5H).

Any 2 can be moved straight on to the foundation stack. Therefore, the 2 of Hearts can be moved. Further analysis shows that we can indeed empty the above-mentioned stack, as follows.

To move the 10 of Clubs, we need to move it onto a Jack. The top-right stack (3D, 2C, 2D, JC, QC, 7H) provides a means to doing that, since two of the cards above the Jack can be moved straight onto the Aces. We just need to be able to move the 3 of Diamonds. Therefore we require a 4, which is available if we move the 8 of Diamonds onto the 9 of Clubs.

Now the tableau looks as follows: 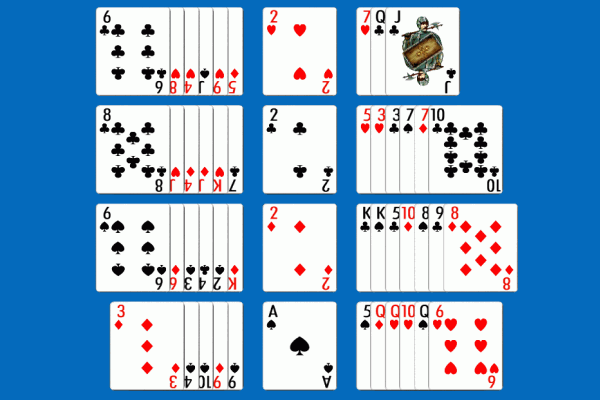 The 3 of Clubs and the 3 of Hearts can both be moved to the foundation. This leaves the 5 of Hearts which can be moved onto any of the 6 of Clubs, 6 of Spades or 6 of Hearts. In general, it's better to move it onto the same suit, ie the 6 of Hearts: 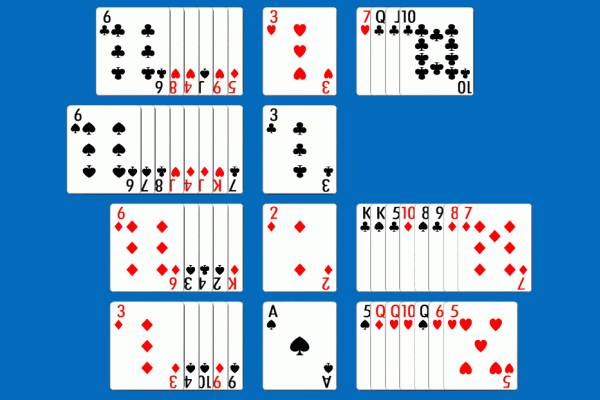 Now that an empty column has been created, this can be used to help with future manoevres. We want to keep exposing cards and forming sequences, so that cards can be eventually moved onto the foundation.